Quito, 8,900 feet above sea level and a few minutes away from the 'middle of the world'

Saturday morning, the sun filters through the curtains and illuminates the hotel room with a golden glow. I look out the window and what was dark last night is now a surrealistic painting. An intensely blue sky contrasts with the various tones of green of Mt. Pichincha, the city’s guardian mountain, an imposing volcano rising to an altitude of almost 18,000 feet.  Brightly coloured picturesque houses climb and crawl up the mountain’s slopes. Across from there, a nicely kept verdant park starts getting busy with morning joggers, artisans setting up their street stalls and early passers-by.

We are in Quito, the historic capital of Ecuador, 8,900 feet above sea level and a few minutes away from the exact “middle of the world”, the Earth’s waist, Latitude Zero. Breakfast is a superb treat, the highlight of which being the delicious tastes and striking colours of no less than a half dozen local fruit juices. The weather in Ecuador is pleasant considering the equatorial position; the elevation sets a year round temperate climate with no extremes, it is like a permanent spring. 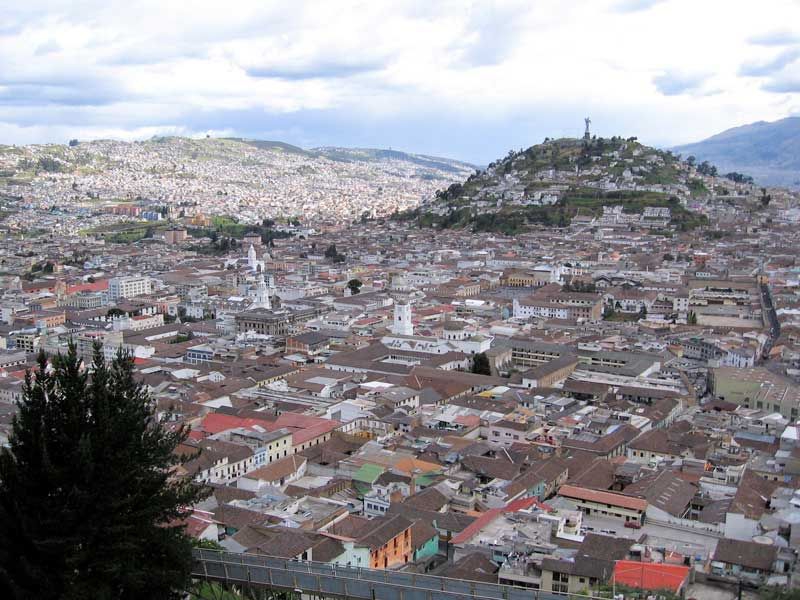 We have signed up for an introductory day trip tour featuring the best sightseeing points or city observatories (locally called “Miradores”), a great way to admire the capricious and truly spectacular geographic layout of Quito. Nestled in a winding narrow valley, it is “crushed” between mountains and dotted with hills everywhere you look. We make our first stop at the monumental National Basilica Church, the city’s (and Ecuador’s) largest cathedral. A gigantic structure of grey coloured granite rock, it sits atop one of the lower city hills.  The 18th century church, which has been under construction for more than two hundred years, is a magnificent example of neo-Gothic architecture: high towers, terraces, columns and large, fully painted round or triangular windows, a true masterpiece of art.  Luis, the enthusiastic guide, points out the gargoyles. These represent, to our amazement, animals from the Galapagos: turtles, iguanas and even open winged boobies. On the northern wing, the gargoyles are rock-sculpted animals from the Amazon rainforest: tree sloths, jaguars, monkeys and caimans. This is just the first stop on our tour, and it’s already proving intriguing and awe-inspiring. 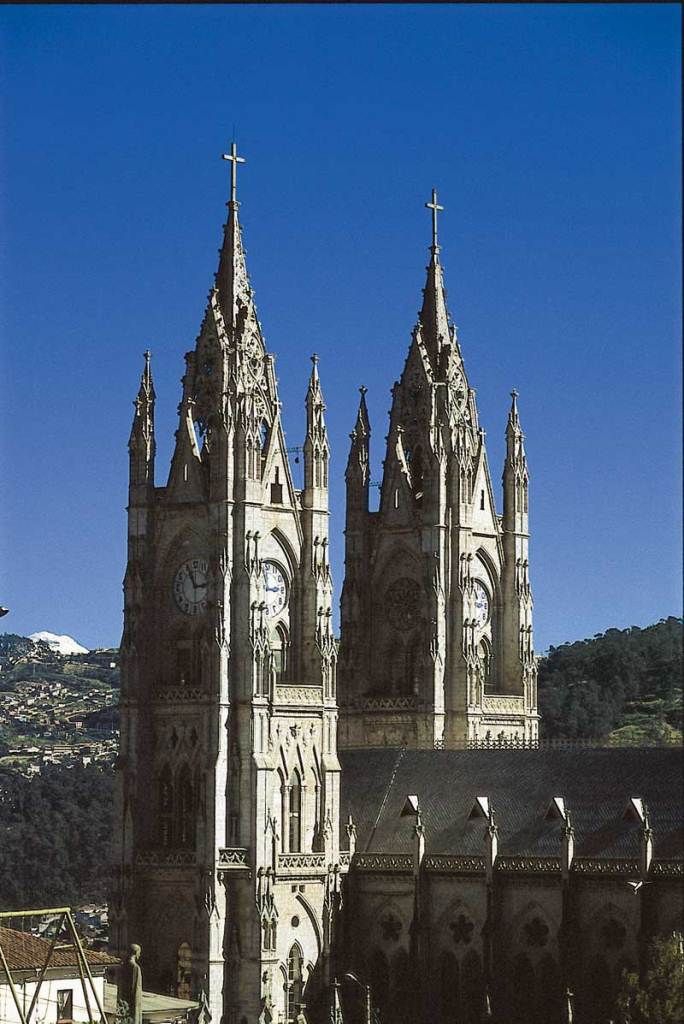 Then we drive up the very steep Carchi street and we actually seem to be climbing to the sky - it looks closer by the minute. The driver, Freddy, skilfully manoeuvres our van to perfect safety up the very narrow cobblestone street, while Luis gets more excited as we start seeing the peaks of several gigantic snow-covered volcanoes. We arrive at the first Mirador, almost at the top of San Juan Hill, a picturesque neighbourhood of small colourful houses with great views of the city and former site of an ancient temple to the Moon. We disembark and take a short walk to a specially arranged balcony to observe one of the most fantastic city views I have ever seen.

Below us is Quito’s Historic Centre, the first UNESCO declared World Heritage Cultural Site, with its chessboard design dotted with dozens and dozens of church towers and domes. To the west and slightly behind us is Pichincha, the city’s volcano, and we can clearly see the “Summit of Liberty”, where Ecuador’s last battle of Independence was fought in 1822. 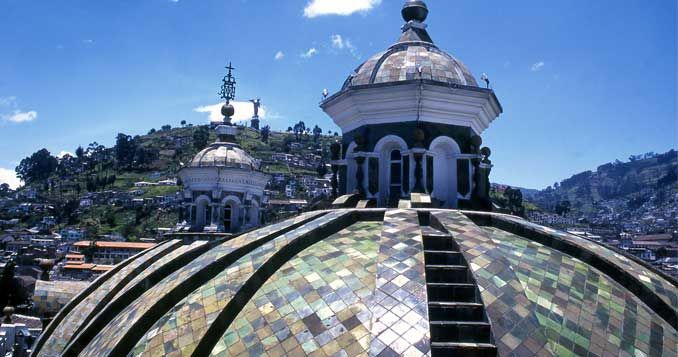 As a dramatic backdrop to the Colonial or Historic Centre is El Panecillo Hill with its colossal statue of the Winged Virgin of Quito, presiding over the whole picture, as if protecting the splendorous city from above. That will be our next stop.  Far to the south east, the city stretches out for miles and the southern districts disappear into the sun filled horizon beyond Pichincha and into the foothills of the next volcano, Mt. Atacazo. To the east, right across from us, is Itchimbía Hill, another former adoration temple to the Moon, now dominated by the imposing Crystal Palace. Soon we will be there too, for another breath-taking view. And finally, the perfect frame for the picture comes from the far south-eastern corner: the magnificent Mt. Cotopaxi, the world’s highest active volcano, towering 20,000 feet high with its spectacularly perfect cone of glaciers and perpetual snow, shines against an amazingly blue sky.

No wonder the city’s Tourism Authority uses the slogan “Quito -Touch the Sky”. I cannot shake the feeling of being closer to the sky than ever before.

Love Luis's account of Quito? You may find the following useful! 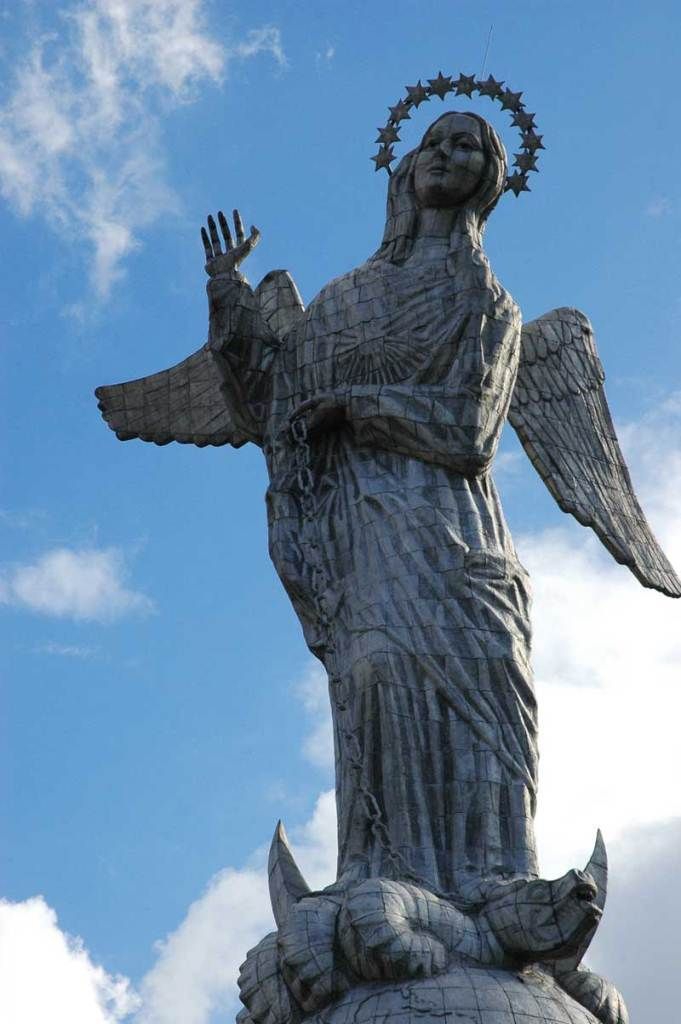