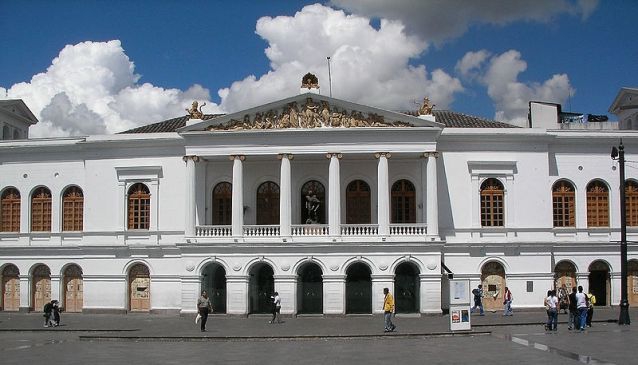 Teatro Sucre is located within a spectacular colonial building, in the historical quarter of Quito. The venue was reopened in 2004, after an extensive restoration as part of the regeneration of the city.

Teatro Sucre was built all the way back in 1877, at a cost of 111,000 Ecuadorian SUCRES. Not long after, an unknown group tried to burn the place to the ground. Repair work was carried out before the turn of the century by a German architect who went by the name of Francisco Schmidt.

The result was a style reminiscent of a European opera house; the architecture is neoclassical, with clear influences from the Pantheon in Ancient Greece on its front façade. Following its more recent restoration, the theatre is now one of the main cultural centres of the city. Hosting a wide range of events, it has seen high quality Ecuadorian and international opera and dance performances, concerts, dance, and theatre productions.

The theatre has also played host to all kinds of events over the years. For example, it was the setting for many presidential events and also beauty contests such as Miss Ecuador and Queen of Quito. The venue can hold a maximum audience of 804; the seats are spread over a main auditorium, a series of lower and upper boxes and a bezel.

Teatro Sucre is part of the Sucre National Theatre Foundation, which runs several theatres in the Quito area. You can find upcoming events on the foundation's website, to the right.