A Unique Rail Voyage from the Andes to the Pacific

Ecuador’s State-owned Railway Company, Tren Ecuador, has launched a brand-new product, aimed to provide voyagers with a unique and memorable experience: a luxurious, custom-made “Cruise Train”, composed of four theme-styled carriages, with a capacity for 54 passengers. The convoy will be powered by electro-diesel locomotives and, in some segments, by restored vintage steam locomotives from the early 20th Century. The basic tour is a 4-day/3-night rail adventure in top-notch comfort, while covering the 285 miles which separate Quito, the Ecuadorian capital, high in the northern Andes, from the main seaport city of Guayaquil on the Pacific coast. The trip will operate under a scheme of fixed departures and will run tours from Quito to Guayaquil and vice-versa. The program is mainly geared for the high-end travel markets, yet open to anyone who wants to take a real “train trip of a lifetime” riding “the most difficult railway in the world”, as it was tagged almost a century ago when it started uniting coast and highlands, through the most amazing landscapes while ascending to the Andes or descending to the Pacific coast. 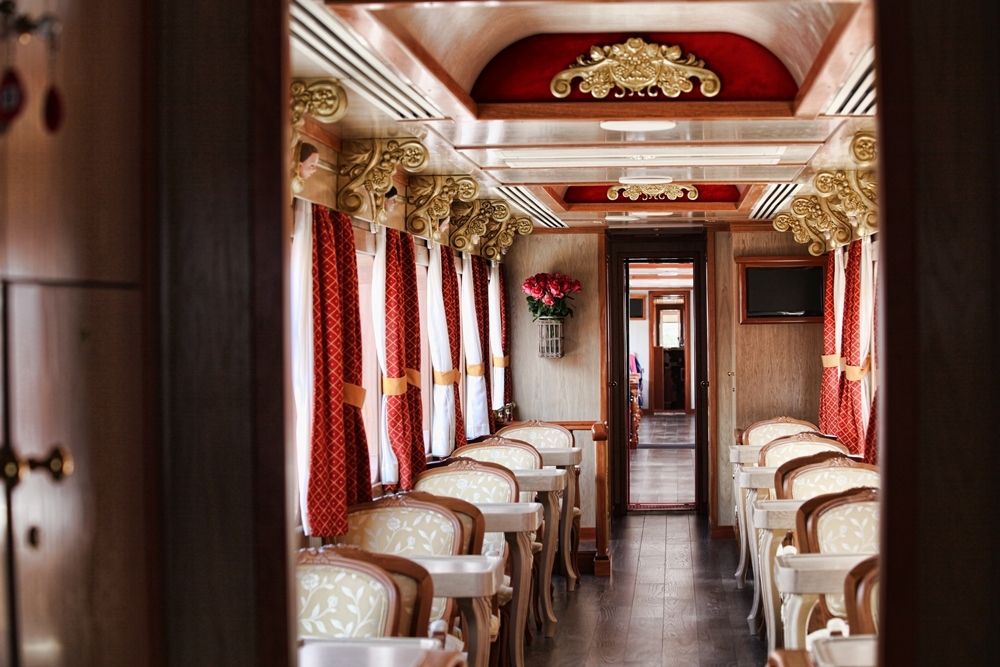 The “Cruise Train” (Tren Crucero in Spanish, as you will find it on the internet) will begin its operations in June 2013 to commemorate the complete rehabilitation of the full-length rail trip between the nation’s two main cities, separated by the giant wall of the Andes Mountains and by almost 9.000 feet of elevation. The works, which required an investment of 280 million US dollars, allow the creation once again of the legendary train voyages between the two most emblematic human hubs of Ecuador, which were discontinued after the 1982-83 El Niño phenomenon that destroyed bridges and large sections of the railway. The trip involves breathtaking scenery as the train traverses the stunning Avenue of the Volcanoes, green valleys, colorful pueblos and towns, dramatic descents down steep cliffs, startling canyons and roaring river gorges, down to the warm tropical coastal flatlands with their marvelous fields of banana, sugar cane, cacao, coffee, pineapple, teak and balsa wood, citrus and other exotic fruits, wetlands and rice fields covered with hundreds of white egrets and other wading birds.

The journey includes the famous “Devil’s Nose” descent where the train negotiates its way down a near-800 feet high rocky cliff through an ingenious zigzag system where the locomotive descends or ascends by doing one stretch forward and the next one backwards, a rail engineering feat regarded as unique in the world and an awesome accomplishment of its construction. 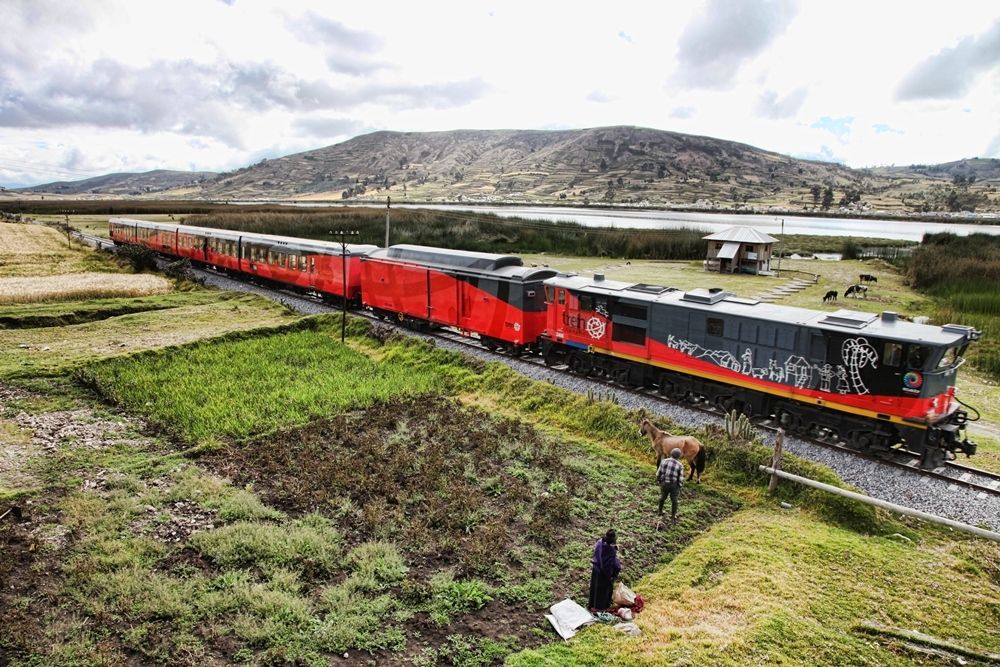 The Tren Crucero features two carriages lavishly decorated in early 20th century style, recreating the days of luxury train travels. They are equipped with comfortable seating facing each other and furnished with tables for placing books, drinks, or coffee or playing cards. Large panoramic windows allow the spectacular scenery to be always present in the eyes of the travelers. The coaches are equipped with a public address system for announcements and piped-in lounge music, lockers and bathrooms for the guests’ comfort. A third carriage offers a coffee-bar where the crew serves beverages and snacks, while the fourth coach features a lounge area for relaxation, reading or socializing, with an open terrace at the rear end, for the passengers to enjoy the crisp air and feel the proximity of the exuberant nature and landscapes as the train rolls over hills, alongside rivers and plains, or under scores of magic tunnels carved under the solid rocks.

The crew includes a Cruise Director who is in charge of passenger service and of coordinating the program of activities along the route. He is also in charge of the passenger service staff which includes a bilingual bartender and a team of bilingual, licensed and specialized guides who provide guests with abundant an fascinating information about all that is seen and done during the voyage. 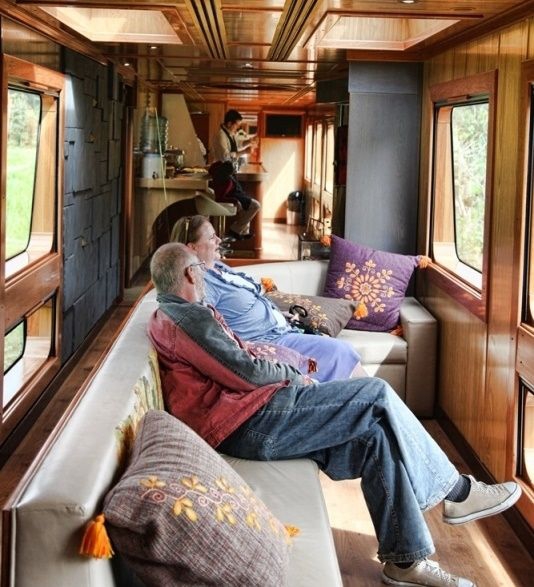 The train voyage is complemented with a superb program of activities and overnights at historical Haciendas and beautiful Country Inns, delicious Ecuadorian cuisine and time for nature exploration, unique visits and encounters with the local people and cultures. Some of the highlights of the program include a visit to the majestic Cotopaxi National Park, lunch at an Inca-epoch Hacienda converted now into a luxury Inn; a folklore dance and music performance by Andean communities; overnight at a centuries-old colonial Hacienda that has among its roster of guests the names of Simón Bolívar, Alexander von Humboldt, English mountaineer Edward Whymper, Ecuadorian Presidents and independence heroes. Also included are special visits to: one of Ecuador’s largest plantations of roses; the highest point of the railway, Urbina, at the foothills of Ecuador’s highest mountain, the colossal 21.000 feet-high Chimborazo, with its Interpretation Center and a demonstration of the “Ice-men” of the Chimborazo; the historic Andean city of Riobamba and the wildly colorful and vibrant indigenous market of Guamote; the oldest church of Ecuador, Balbanera, at the shores of the Colta Lake; the pretty canyon town of Huigra and its old train station; a settlement of an Amazonian community of the ancient Shuar culture, now established as farmers in the coastal flatlands; a huge cacao and banana plantation and tourist complex on the coast, and the pretty train stations of Yaguachi and Durán. The trip officially terminates (or begins if doing the opposite route) at the bustling port city of Guayaquil.

The tour package includes the four-day train ride; three nights’ accommodations at the selected best available Hotels and Inns along the route; all meals from lunch on day one to lunch on day four; guided tours and programmed visits; a private tourist coach for the side visits away from the railroad; special presentations and cultural demonstrations.

This is a new and exciting way to enjoy the magnificence of Ecuador’s nature and culture, a fantastic trip not to be missed.

Check-out Tren Ecuador for more information on the Cruise Train and other adventure options; and for more tips and things to do in Ecuador, visit our Ecuador Overview page. 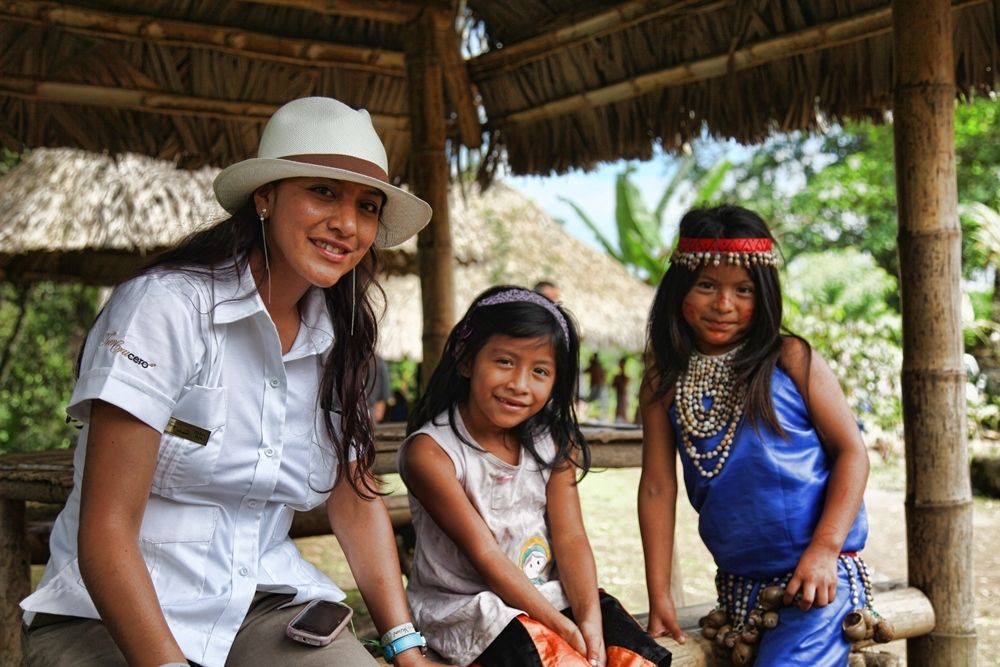