Bahía de Caráquez is a mid-sized city located in the Province of Manabí, on the central Pacific coast of Ecuador. It stands on a long and narrow peninsula with the Pacific Ocean to the west and the wide delta of the Chone River to the east. The city is recognized by most historians as the actual “cradle” of the Ecuadorian nationality. Thousands of years ago, the Caras, an ancient culture of seafarers, arrived to settle in the fertile valleys that surround the Chone River’s estuary. The Caras are considered the origin of the prosperous and wise Quitu-Cara Kingdom. Today Bahía is a thriving city with a pretty waterfront alongside the River, high-rise condos, beautifully gardened mansions and old neighborhoods with wooden houses of early 20th Century style. Ecuador’s longest and most modern bridge, over the river’s delta, connects Bahia with the small and picturesque beach resort town of San Vicente at the opposite shore. The Chone River delta and its surroundings are recognized among the best birding areas of Ecuador.

It is a lovely morning and the sun shines over the hotel’s nicely trimmed gardens. As we head down the walkway leading to the hotel’s private dock, we have our first amazing bird encounter with a half-dozen red-headed or turkey vultures (one of the less common and prettiest species of the not-too-popular scavenger birds), standing idly over the wooden railing. They allow us to approach them amazingly close until they fly away. Good photo session there to begin the day. The tide is low and along the sandy shores some plovers, turnstones and sandpipers busily peck the sand in search of small crabs or snails. We haven’t even left the hotel premises and the birding picks up interesting heights. A group of juvenile pelicans flies over us in a perfect V-formation.

My colleagues and I board the fast boat that will take us to the Frigate Birds and Wildlife Refuge of Isla Corazon (“Heart Island”), a protected area located on a natural mangrove island anchored in the center of the river. The island has an actual heart’s shape, especially when seen from above. The Refuge is managed by Ecuador’s National System of Protected Areas, through the local administration of the Nature Refuge. It takes us some twenty minutes to sail upstream as we must first stop at the small riverside community of Portobelo to pick-up a local native guide and a Refuge warden. Francisco is the guide, a tall man in his early sixties yet exuding energy, enthusiasm and ample knowledge. Carlos the Park warden is a young university student in charge of controlling the appropriate behavior of visitors and operators at Isla Corazon. We transfer here onto a smaller motorized dugout canoe, driven by Francisco himself, for the now shorter trip to the famous island. The whole time we are at the river delta we realize it is a bird’s haven as we see flocks of egrets, cormorants, pelicans and even boobies flying overhead. 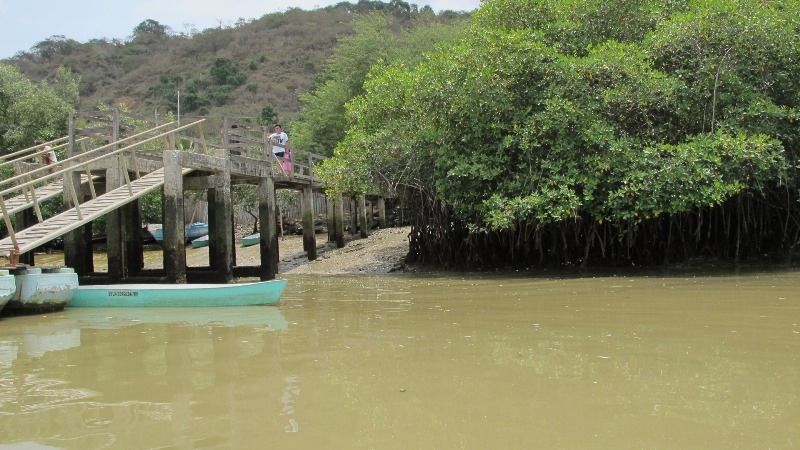 Now we reach the Island, effectively made of a compact mass of predominantly red mangroves. Francisco stops the motor and from now on we will paddle to avoid disturbing the abundant bird population that uses the island as their home. As a birding aficionado I start sighting several species of birds such as snowy egrets, striated herons, yellow-crowned night herons and some ibis. Francisco, the native guide, amazes me with his advanced ornithological knowledge. With Carlos being a biology student, we start a lively “birders” conversation and sighting contest. We enter the island paddling along one of its many aquatic paths, under the awesome maze of mangroves. We begin to see some tyrants, flycatchers, trogons and even a woodpecker. Francisco gives us a master class about mangroves. At one point we pull alongside a wooden walkway built by the Refuge administrators for a short walk to an observation tower built of sturdy wood at a strategic vantage point. Reaching the upper platform, some ten feet above the ground, the scene is stunning: the green mangroves look like Christmas trees with the bright red pouches of hundreds of male frigate birds, busily courting as it is, lucky us, the peak of their breeding season. The sight is dramatic beyond words. The white-breasted female frigates fly overhead and create waves of excitement among the diverse groups of males, hoping to be chosen by one of them. Francisco and Carlos tell me that the island’s population of magnificent frigate birds is larger than the one found in the Galapagos Islands. What looks like an unquestionable fact is the high density of the population versus the island’s surface. From the observatory we also discover that towards the northwestern edge of the island, there is another large bird population, this one of neo-tropical cormorants who apparently “bought” their own corner of the island to establish as their home to breed and feed from there. 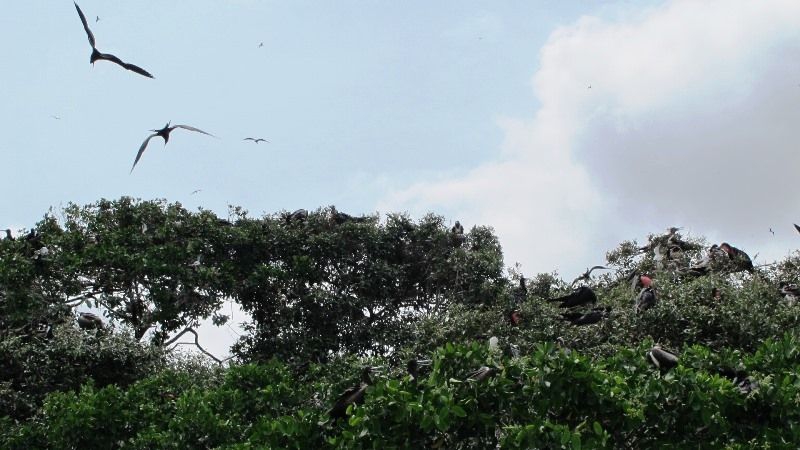 Back to our dugout canoe, we now exit at the opposite side of the island, not without having had an unexpected close-up encounter with a mid-sized boa constrictor fast asleep, wrapped around a lower mangrove branch. Francisco tells us that the reptile has possibly fed recently and might spend two or three days just sleeping while digesting the meal. Now we slowly cruise along the western shores of the Island to find out that it also teems with white Ibis, Nazca boobies, storks and several types of gulls. No wonder Isla Corazón is a Birds Refuge and paradise.

Back at the small community of Portobelo we say goodbye to Francisco, and a vehicle waits to bring us back to Bahía, this time across the brand-new “Los Caras” bridge. On the way, Carlos tells us about the Wetlands of La Segua, some forty minutes further upstream the Chone delta, another bird’s paradise which we will visit on another occasion, one more wonder of nature and a new exciting place for bird-watching pros and aficionados.

If you liked this article, maybe you would like to know about Ecuador's National Parks and Reserves.

Read here about all the amazing wonders Ecuador has to offer and check other Things To Do there.

Look for accommodation for your visit to this beautiful country. 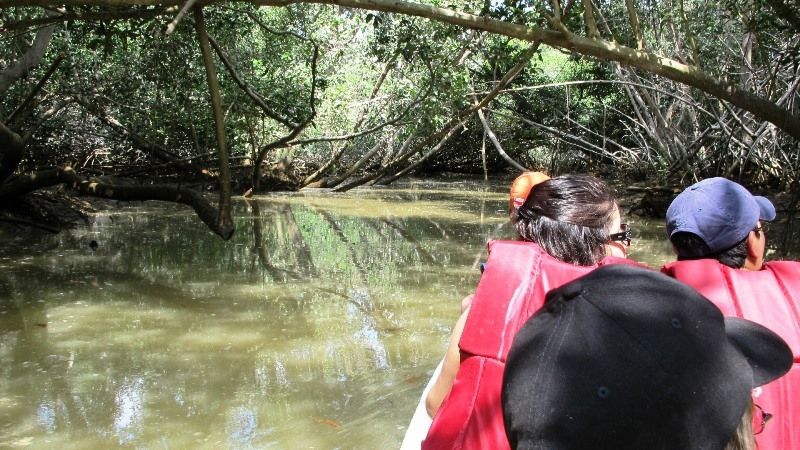