The Must See Catholic Churches of Quito

Nestled on a long and winding narrow valley, surrounded by stunning Andean volcanoes, hills and mountains, Quito, the historic and scenically splendid capital of Ecuador, is particularly proud of its Pre-Columbian past.

The city was once the capital of the mythical “Kingdom of Quito”, before becoming the “Northern Capital of the Inca Empire” during the few decades of Inca reign. Later on, during the Spanish Colony period, which lasted nearly 300 years, it was known as the Capital of Art of Spanish America, being frequently referred to as the “Florence of the Americas”. During the colonial period, dozens of monumental cathedrals, churches, cloisters and convents were built in Quito. Their edifications alone became masterpieces of stone carving and architecture while their interiors filled with the most remarkable works of religious art, paintings, sculptures and ornamentation that fused admirably the European baroque styles with the Amerindian colors, shapes, visions, characters and elements. Hence, the historians and scholars named that new mixed style of art the “Quito Colonial School of Art”. This is one of the reasons why, in 1978, with Quito being by then the 150 year-old capital of the Independent Republic of Ecuador, UNESCO declared the City’s Historic Center as the first ever “World Cultural Heritage Site”. The “Old City” is considered by the experts as the largest in extension and best preserved colonial quarter of Latin America.

With this background overview, here is a short review of “must see” churches of Quito, each one a unique and different monument to art and splendor. 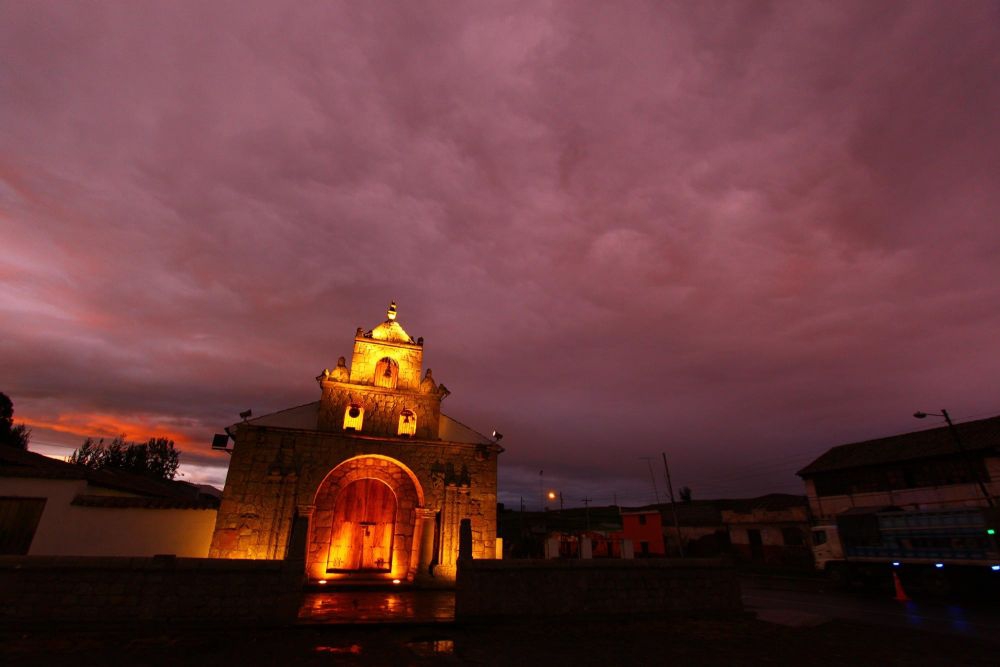 The largest in construction surface and tallest religious temple in all of Ecuador, the Basilica is a post-colonial building. It was constructed between the late 1800’s and inaugurated, still totally unfinished, in the late 20th Century, more than 200 years later. The Basilica stands at one of the natural entrances of the Historic Center, atop a plateau that overlooks the legendary Itchimbia Hill to the east and to the south is the steep descending Garcia Moreno Street, also known by its colonial name as the “Street of the Seven Crosses”. The Basilica is a stunning neo-gothic construction made of solid gray rock materials from quarries of the Pichincha Volcano. It is more impressive outside than inside, but its grandeur is undeniable. The hand-carved stone façade and external walls of the enormous cathedral feature large and intriguing gargoyles: on one side they represent iguanas, tortoises and boobies (Galapagos fauna) and on the other side they represent jaguars, crocodiles and monkeys (Amazonian fauna). The other outstanding feature, better appreciated from inside, is the stained-glass windows depicting religious figures and biblical passages. They are well worth a stop to initiate a tour of Colonial Quito. 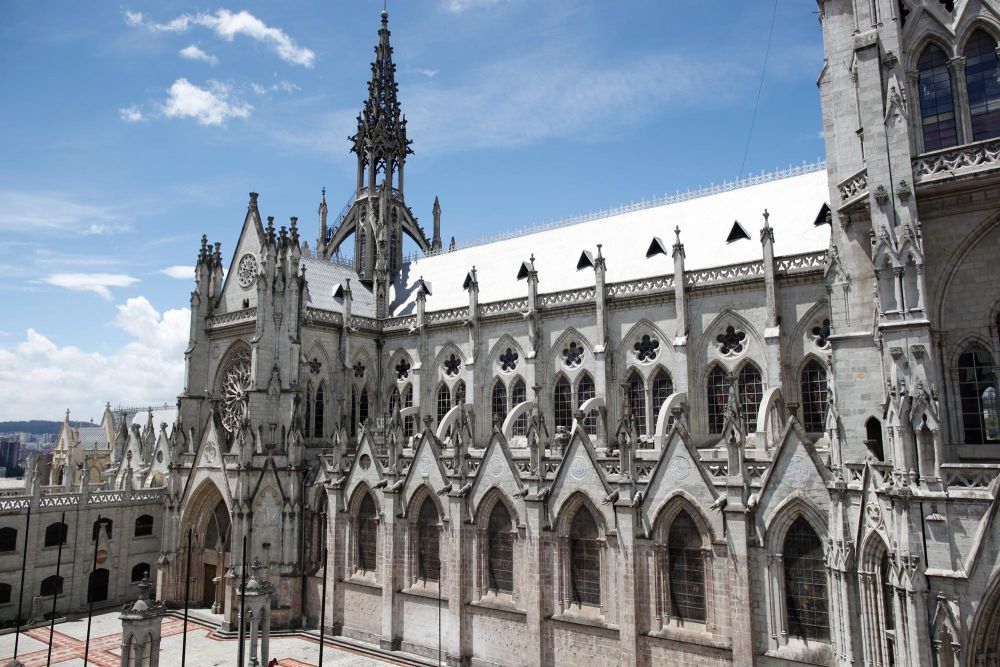 Considered by many as Quito’s “jewel of the crown” in terms of religious temples and architectonic art, this Jesuit temple, built between 1635 and 1705, impresses the visitors with its elaborate baroque façade, also hand-carved on grey stone. Its twisted columns and external decoration are amazing. Inside, the church glitters with its walls, columns, pillars, ceilings and altars fully covered in shiny gold-leaf. The predominating baroque style is mixed with touches of Moorish art, particularly on its ceilings, plus Amerindian touches on some of the sculptures, such as dark-skinned angels. The exquisitely wood-carved pulpit features a unique case of bare-breasted female angels of clear Amerindian origin. The impressive central dome is another piece of art, while the lateral altars boast impressive sculptures, carved by the famed Quito School of Art native artists. The central altar is an awesome wall-to-wall and floor-to-ceiling piece of art, shining in pure gold-leaf and including sculptures of the main Catholic orders: the Jesuits, Augustine, Franciscans and Dominicans. Also impressive are the entrance paintings as well as the unique collection of paintings depicting the Biblical Prophets. Without any doubt this is one of the most outstanding Catholic churches in Latin America and the world. 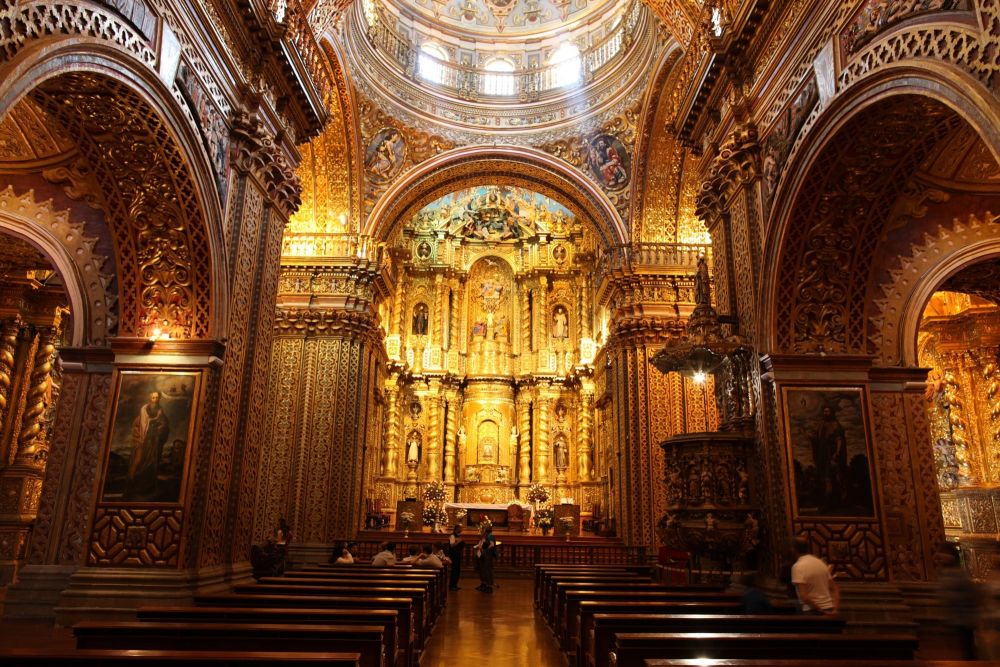 In the very heart of Quito’s Historic Center and Colonial quarters is the majestic Church and Convent of San Francisco. It is found in a huge complex presiding over the western side of the immense and historic Square of San Francisco, Quito’s oldest and largest plaza, and is Quito’s most antique Catholic cathedral. Its construction began just one year after the Spanish foundation of the city in 1534 and was finished by 1605. The impressive front has as its centerpiece two symmetric white bell-towers and down below is the huge semi-circular stone atrium which marks the main entrance to the temple. The style here is a more intriguing and rich mixture between a kind of “raw” baroque, combined with elements of Amerindian Cosmo-vision; indigenous skinned and faced angels, Sun Gods and native fruits as part of the sculpted decoration awash in gold-leaf on many of the columns and altars. The main dome and the lateral altars also feature amazing religious sculptures and paintings. The main altar features the famous Winged Virgin of Quito, a wooden masterpiece of the mestizo sculptor Bernardo de Legarda. The church also has a special altar for the venerated sculpture of the “Jesus del Gran Poder”, a statue that only leaves the church for a few hours once a year to preside the giant Good Friday Procession. Alongside the church is the Franciscan Convent with its quiet patios and interior courtyards, fountains and art collections which are also worth seeing if you are particularly interested in unique styles of art and especially religious art.

If you don’t get tired of church-visiting and don’t think that after seeing one you have seen them all, within a few blocks of each other, in Quito’s fabulous Historic Center, the Churches of La Merced, Santo Domingo and San Agustin are also worth visiting. We also recommend Quito’s 16th Century Metropolitan Cathedral and the adjacent El Sagrario Church, located at Independence Square or “Plaza Grande”, right across from the equally 16th Century Presidential Palace.

For more "must sees", take a look at our Top Ten Attractions in Ecuador.

You might find information about museums in Quito also useful to complement a downtown church tour.

Search for accommodation in Ecuador. 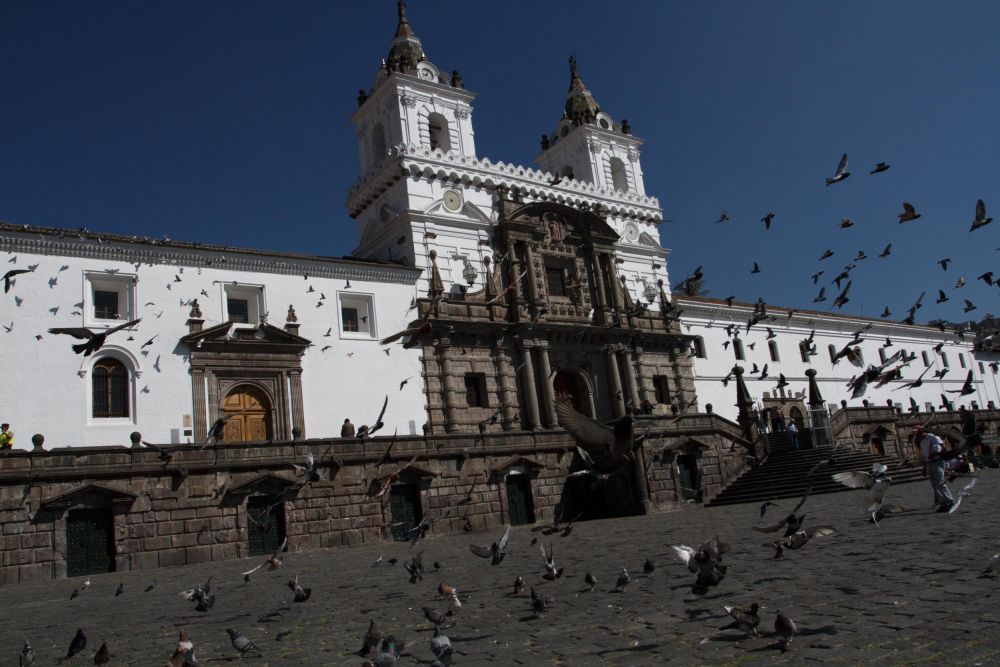