Ancestral Festivities of the Andean Cultures

The celebrations include color-filled and extremely dynamic theatrical representations...

The name “Inti Raymi” (Kichwa language) means “Sacred Festivity of the Sun”. It is the most important festivity in the year’s calendar for the majority of the indigenous peoples who inhabit the Andean region, particularly in Ecuador and Peru. The beginning of these celebrations goes as far back as the origins of the Inca Empire. However, similar celebrations were also held, centuries before, by the indigenous nationalities which inhabited what is the present territory of Ecuador.

The main element of this festivity is the Cult to the Sun God. It is the time to thank the Sun for the Light, the Harvests and the fertility of the “Pacha Mama”, Mother Earth. It is a celebration with high connotations of spirituality yet filled with colors and merriness. For the Spanish conquistadors, this was the “Sun’s Easter Feast”. A fundamental element of this ancestral festivity is also the geographic and astronomical location of the high Andean valleys, hillsides and plateaus, positioned near or at the actual Equator of our planet, as well as the relation of the region’s climate with the cycles of sow and harvest which were practiced by the native peoples since centuries ago. These advanced civilizations studied and learned amazing facts about the movements of the Sun and the Moon, aided by their privileged natural location with respect to them.

The Inti Raymi celebrations, which have acquired international fame for their grandeur and fantastic display of color and symbols, take place along the Andean communities of Ecuador, with special force in the Northern Andes and particularly in the Provinces of Imbabura and Pichincha, but they are also present in the Central and Southern Andes. The festivities occur during the month of June and can last from a couple of weeks to more than a month, depending on the communities. However, the climax of the festivities everywhere takes place during the Summer Solstice (Northern Hemisphere), between the 21st and the 24th of June. On the actual Solstice Day, June 22, at these Equatorial locations, the Sun does not project any shadow during the noon hours, a phenomenon that speaks of the particular relationship of the Sun with this latitude of our planet. This awesome event may have triggered the development and further evolution of the “Inti Raymi’s” celebrations.

One of the most representative epicenters of the Inti Raymi feasts is the area of Cayambe, originally inhabited by the Kayambi cultures and presently by their descendants and the inserted mestizo population. Cayambe is just one hour north of Quito, following the country’s main road backbone, the Pan American Highway. The celebrations include color-filled and extremely dynamic theatrical representations staged by the inhabitants of the communities of the zone themselves, organized into massive “troops” with specific roles, carefully designed and performed. The leading figure of the fiestas is the mythological “Aya Uma”, the spiritual leader of the peoples, protector of Mother Nature and administrator of the spiritual energies of the big mountains. Dressed in multicolored garments and accessories, where every element has a particular significance, the Aya Uma’s face and head are covered by a large cloth mask with faces in the front and in the back so, from any angle of vision, the symbolic elements of his face mask can be seen. The main events include stunning rituals of dance and music along with the extreme colorfulness of the costumes. 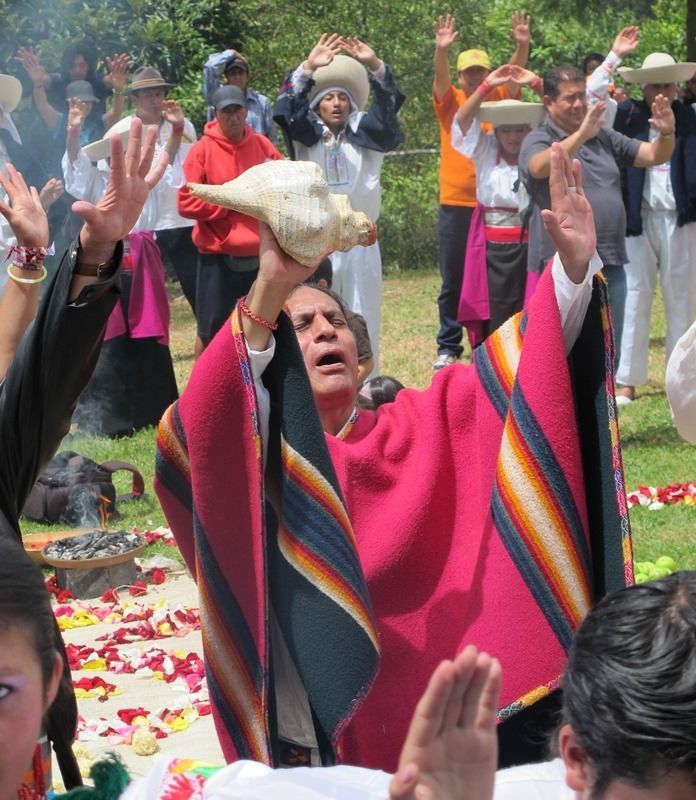 One of the most impressive events is the symbolic “Seizing” of the town’s main square, where crowds of dancing men and women converge, while following a perfectly synchronized script that includes chants, ceremonial shouts and movements which constitute one of Latin America’s most extraordinary expressions of popular open-air massive representations, spinning with rhythm and force. Once the square is taken over, a Ritual Fight is staged and it all ends with a lively popular fiesta featuring dancing, music and abundant food and drinks, where the centerpiece is the traditional “Chicha”, a fermented brew made of maize. The rituals also include abundant fireworks which represent the forces of light, fire and power. The musical instruments played are of ancestral origin and mostly percussion and wind. Food is also part of the fiesta and is prepared by the women of the communities, featuring the most delicious Andean typical dishes and culinary delicacies. Another element of the celebrations is the “Ritual Bath”, a symbolic body and soul cleansing ceremony conducted before dawn at the rivers, lakes or waterfalls near the communities.

With basically the main elements of Cayambe’s fiestas, as described above, and just some local variations for the different communities, similar events can be enjoyed in the neighboring communities of Zuleta and in the nearby Imbabura Province, particularly in and around Otavalo, Peguche and Cotacachi. On Solstice Day, special ceremonies are staged at highly symbolic locations such as the “Middle of the World” City and tourism complex, just fifteen minutes north of Quito; as well as at the nearby ruins and archaeological sites of Rumicucho and Cochasquí, ceremonial sites and special observatories of the Sun and the Universe for the Pre-Incan cultures, all located right on the Equator.

For those who might be around Cuenca and the southern Andes during the Solstice days, Inti Raymi celebrations and ceremonies are conducted particularly at the Inca Fortress of Ingapirca, Ecuador’s most important Inca construction, where special rites take place to thank the Sun God and the Mother Earth for abundant harvests in June and July. As elsewhere in the Andean world, music, dance, theatrical representations plus food and beverage are part of the festivities, with the awesome background of the Ingapirca Temple and Fortress, less than an hour’s drive north of Cuenca. Regardless of the location, the Inti Raymi festivities will marvel the visitors who can enjoy this fascinating encounter with the Andean’s most antique cultural beliefs, expressions and traditions.

To learn about other celebrations in Ecuador, click here

Are you thinking of traveling to Ecuador? Check-out our Accommodation section and see what the Top Ten Attractions of the country are! 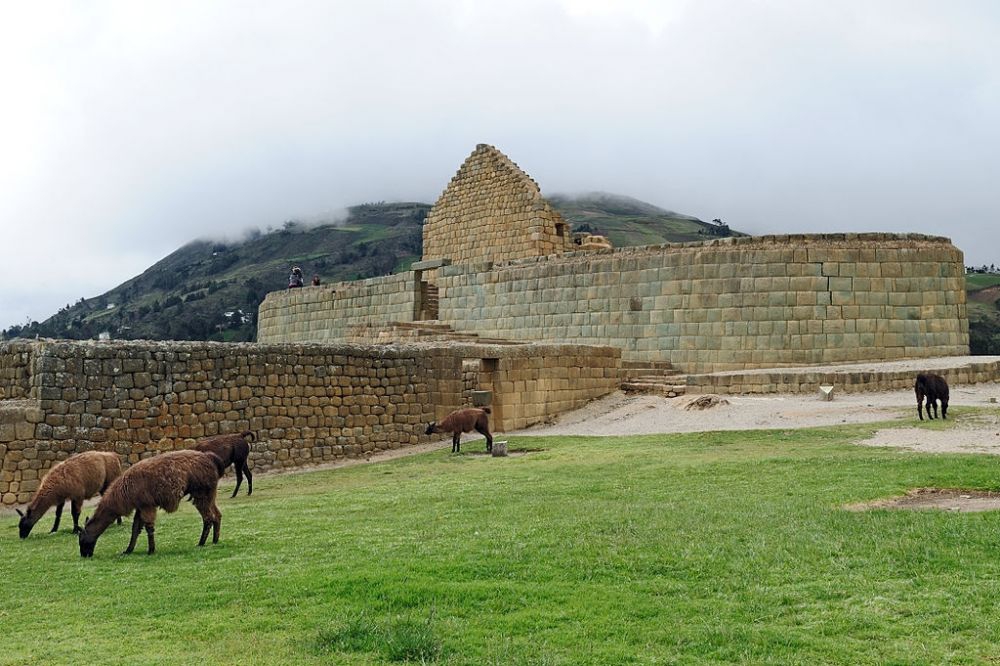